I was born in Newport and although I was brought up in football terms watching Swansea Town as was, from the North Bank of the Vetch as a schoolboy in the 1960’s, I was always a County supporter. The first time I saw the County was at the Vetch, Boxing Day 1967, in a crowd of 12,458 (thanks to Tony Ambrosen and Look Back in Amber) where we went down 4-2. Watching the County lose was an experience to be repeated more times than I can remember.

Since then I’ve managed to watch the County through the 70’s and 80’s in Divisions 3 and 4 of the League, and was present at the last league game, home to Rochdale in 1988. Then the Conference, exile and back again.

I work as a lawyer, specialising in environmental and planning law, and, to cut a very long story short, acted as the solicitor for Newport, Colwyn Bay and Caernarvon in their case against the FAW. During that time I worked closely with the Board who had been responsible for re-forming the club after it was wound up in 1989, and formed a good working relationship with a number of people I first met then, such as David Hando and the rest of the Board. It was a real eye-opener in learning about the complexities of the day to day running of the club.

The case made legal and football history, being the first time a member club has taken its Association to court, despite threats from FIFA and EUFA. More importantly, it secured Newport’s place in the English pyramid system, without which, I have no doubt, we wouldn’t be back in the Football League now.

This case eventually led to the play-off final at Wembley against Wrexham, regaining our place in the League after 25 years in the non-league wilderness. In the intervening years, between 1996 and re-entry to the League I attended most AGM’s, spoke to supporters at games, and expressed growing disquiet at the way the club was being run on the basis of directors’ loans (which, in my view, should have been converted into shares and donated to the Trust), and then growing reliance on a sugar daddy. Although successful in regaining League status, the model was completely unsustainable in the long term, and wholly undemocratic in terms of any real supporter involvement and control.

In the early 2000’s I was involved with Colin Everett in setting up the first meetings with Supporters Direct, which, again, although it was a long time in coming, eventually led to the formation of the Supporters’ Trust, and the taking over of the club by the Trust.

This step was as important as winning the FAW case and regaining League status. In my view a football club is far too important to a community to be left in the hands of a few well-heeled individuals or businessmen. It is essential that it be owned by the community of supporters, and run by that community on open, democratic lines. If it’s good enough for Barcelona, it’s good enough for us!

The long term sustainability of the club has to be the foundation upon which everything else rests. We’ve seen the development of Supporters’ Trusts across the country over the last 20 years, and there is a wealth of experience to draw upon.

The development of stable, long-term links with the local community is essential, working with local businesses, schools, other community organisations as well as local councils and other potential stakeholders.

At the time of writing the single most important thing for the club is to retain its League status. I wholly support the interim Board in all the efforts that it has made in that direction.

What could I contribute to the club if I were elected to the Trust Board? In terms of business experience I was a senior partner in a firm of solicitors for 13 years, and have run my own consultancy for 6 years. You would have my unwavering commitment and support to try and ensure the long-term viability of the club. We have to do this ourselves, with whatever limited resources we have available. It is essential to unite all elements that make up the club, and bring an end to the factional infighting that has sometimes occurred. We can do this, but only if we all act together in the best interests of the club at all times. 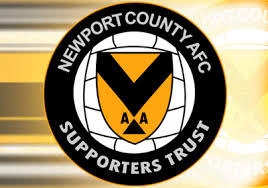