Wow what a few weeks it’s been. We have welcomed about 2,000 new members to the Supporters Trust in the last 2 months, and following the launch of the community share issue on the 27th August we have smashed both our revised and initial target raising £236k and still growing. Our advisors at Supporters Direct who have helped with a number of supporter takeovers have told us that they’ve never seen a response like this over such a short period. Take a bow Newport County AFC fans and people of Newport.

The Trust Board have been humbled by the response, but we know there is no time to stand back and admire what’s happened, it’s time to rebuild the club and we need your help. There will be a number of communications over the next few weeks as we look to involve you as owners. We expect a few bumps along the way as we look to set-up structures to make use of all the goodwill that we’ve encountered, so please be patient and trust in the new vision that we are working towards.

The first thing we need your help with is rather dull but very important!

A new constitution for the Supporters Trust

With all the paperwork signed and ready to give supporters majority control of the club, and work well progressed with the Football League to confirm the Supporters Trust as the new owners, it’s time to get the Trust constitution ready for our new role of owning a professional football club and business with a turnover approaching £2million.

This picks up steps 4 and 5 of the share offer document, identified under the heading ‘what happens if we reach the target?’and detailed below:

Notice is hereby given that a General Meeting of the Newport County AFC Supporters Trust will be held at TBC on 30.10.15 at TBC, at which members will be asked to consider and if thought fit to approve the following resolution:

The rules as they would appear if the resolution is passed can be seen on the Newport County AFC Supporters Trust website at www.ncafctrust.org or on request from the Trust treasurer by e-mailing treasurer@ncafctrust.org

By order of the Board

We are not proposing to change the legal status of the Supporters Trust only to update it to reflect our changing position of owning the football club. We will continue as a Community Benefit Society (CBS), which means that the core principles of the Trust will remain such as:

Our advisors Supporters Direct who help supporters take ownership of sports clubs,produce two sets of model rules for Supporters Trusts, they are for:

With recent events the Trust have now moved from requiring set 1 to set 2, which is best reflected by the objects.

The proposed new objects of the Supporters Trustsay:

The Club’s objects are to benefit the community by;

Since Newport CountyAFC Supporters Trust was originally formed in 2002 there have been a number of improvements to the model rules promoted by Supporters Direct and used by fellow Supporters Trusts. This includes the rules suitable for a supporter owned club which were updated as recently as January 2015.

One of the more recent changes has been the introduction of community shares which give the Trust the power to raise money from the membership through a new method, without changing the one member one vote structure. As explained in the share offer Community Shares are proving a popular way for communities to raise money collectively, leading to a number of community owned pubs, shops and now football clubs. The new rules give us the community share provisions we need.

To recognise and protect our investment in the club, any decision to sell, transfer or otherwise dispose of the Supporters Trusts shares in the company Newport Association Football Club Limited (which would result in the Trusts shareholding being less than 50% + 1) would require both a much higher number of Trust members to turn out to vote, and a higher number to vote in favour.

Future changes to the rules

The Trust Board believe that the proposed new rules give us the platform that we need now to build Newport County AFC as a supporter owned club. The rules can be changed at any time in the future with the support of the membership.

Before completing this form, please read the explanatory notes below and on the following page.

I, being a member of the Newport County AFC Supporters Trust, hereby appoint (DELETE AS APPLICABLE):

(a) The Chairman of the meeting; OR

As my proxy to attend, speak at and vote on my behalf at the General Meeting of the Supporters Trust to be held on 30.10.15 at TBC pm and at any adjournment of the meeting.

1.  As a member of the Supporters Trust you are entitled to appoint a proxy to exercise all or any of your rights to attend, speak at and vote at this meeting. You can only appoint a proxy using the procedures set out in these notes.

5.   To appoint a proxy using this form, it must be completed and signed then sent or delivered to Newport County AFC Supporters Trust, C/O Newport County AFC, Rodney Parade South Wales. NP19 0UU and received by 17.00 pm on 28th October 2015.

6.  A certified copy of any power of attorney or any other authority under which this proxy form is signed must be included with the proxy form.

7.  If more than one valid proxy appointment is made, the appointment received last before the latest time for receipt of proxies will apply. This includes where members may have chosen to vote electronically. 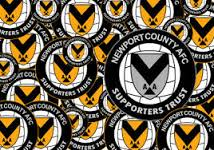