This is the eleventh of our communications and the fourth of our monthly newsletters.

Members would have received a communication recently in answer to a number of questions that supporters had asked and the communication below complements the responses where appropriate.

As outlined in last week’s communication we always welcome feedback and thus if you have any thoughts or views we would encourage you to share them, if you could email them to office@newport-county.co.uk

There are a number of areas to cover in this edition:

The audited accounts for the above financial year were submitted on time to Companies House and the Football League. This was an important milestone from a timing perspective and we had made a decision that they should be audited to ensure the independence and appropriate external scrutiny.

Thanks to Simon Sadler, Nick Igoe and HSJ who worked very hard to meet the milestone.

Whilst the accounts are in the public domain if you would like a copy emailed then please send a request to treasurer@ncafctrust.org

In line with the constitution the club will hold its AGM on 5th May 2016 with a venue tbc.  The meeting will commence at 7.30pm and further details regarding agenda, purpose, etc will be disseminated at the earliest opportunity.  The aim is to launch the business plan for 2016/17 and have representatives from all areas of the club and board.

At the AGM the club will launch its business plan for next season. All areas of the club have been asked to contribute.

As with all business plans it will be a live document and we intend to report against it throughout the season and amend as and when needed.

Following the first round of elections, and consultation with Supporters Direct, we can confirm that the one candidate, Charlie Hopkins, who provided a submission, will become a Director at the end of the season following completion of the Football League’s Fit and Proper Person test and acceptance by Companies House as a Director.  Charlie’s submission is available to view on the Trust website and we’re looking forward to Charlie joining the new Trust Board in due course.

As promised we are now launching stage 2 of the election process which will cover the 8 remaining positions. We acknowledge feedback from the first stage of the process and will endeavour to ensure all fans are fully aware of the process and requirements, which we believe are fair and open to all. As stated previously all Directors will have parity in the decision making process and will be responsible for the strategic direction and financial stability of the club.

The election documentation issued for the first stage can be found on the Trust website and again we draw attention to the responsibilities that all successful candidates will have to carry.

Provided below is the full schedule for stage 2 of the elections.

Voting forms and manifestos sent to members - 19th May 2016

The intention is to hold an end of season presentation on 30th April 2016 after our last home game of the season and the charity match that is planned.

The event is an opportunity  for all the club to come together under one roof and one badge.

This will include all elements of the club from the academy to supporters groups and beyond.

The presentation evening will be an informal affair and we are delighted our friends in the supporters club have agreed to organise.

It will cost £1 which will include a raffle ticket and open to all those associated with the club and fans.

We have booked the Newport centre which has a capacity of 550.  There will be approximately 400 attending leaving around 150 for supporters.

Whilst informal, the evening will have a structure with a running programme.

Thank you for your continued patience in this area. We recognise that the issue has been rather prolonged.

We have overcome our latest hurdle and the certificates will be ready for collection at the club shop week commencing 25th April 2016.

On Sunday 1st May, Newport County AFC will be hosting a family fun day for everyone in the community at Rodney Parade.

The event will bring all aspects of the Club together, in what will be a fun and enjoyable day for the whole family.

The day is being organised collectively by the Junior Academy, County in the Community and Newport County AFC DSA along with support from Energize Radio.

On the main pitch the Junior Academy are giving the youngsters of Newport and the surrounding areas a chance to play on Rodney Parade 1st team pitch, and those interested in entering a team should email darren.broadribb@newport-county.co.uk.  We also intend to host a showcase match in the afternoon between NCAFC XI and a Sponsors XI.

The event will run from 9am in the morning to the early evening and we hope to see as many fans there as possible to support this event.

Here are a few snippets from the community team.

We have 9 people signed up to represent Newport County AFC cycling from Yorkshire to Amsterdam/Oakwell to Ajax from 3rd  June 2016 -5th June 2016. This is for Prostate Cancer-Men United keeping friendships alive. Prostatecanceruk.org/Amsterdam .Last years team Dan Harvey, Norman Parselle, Deiniol Parselle & Danielle Seivwright will be joined by Dave Lewis, Dan Williams, Mike Pratt & Nathan Blake and Liam Jenkins. The gaffer Warren Feeney is not coming this year unfortunately because he is away at this time hopefully signing Steve Lowndes (that’s a joke by the way). We need to raise £1000 per rider and will raise our funds as a team. We have a few fundraising initiatives coming up you can also donate via https://www.justgiving.com/County-in-the-Community-London-to-Amsterdam-Cycle-Challenge

Golf Day – Date and venue to be confirmed.

Bag Packing – Date and venue to be confirmed.

We would like to thank everyone who has contributed so far to our fundraising efforts especially all the people who turned up for the quiz night. We would especially like to thank Lyndon Quizmaster Clark, The Smile Council who donated £110 and the Trust Board who donated £120. It was also nice to see our Goalkeeper Joe Day there with his partner supporting the night and the supporters club led by Bob/Susan and Jeff (as ever) and they retained their title and donated the prize money to the cause. It is very much appreciated by all our riders UTC.

County in the Community have organised a walking football tournament.

All players must be over fifty years of age and the maximum squad size is 7.

The winners of Sunday’s tournament will go on to represent Newport County AFC at the regional finals, which take place week commencing 9th May 2016, at a venue that will be confirmed closer to the date.

Entry to the tournament is £2 per person and each game will last no longer than twenty minutes.

If you would like to enter a team into the tournament, or want to find out more about walking football, please contact Community Development Officer Norman Parselle via email, or by phoning 07468 723636.

Some news from our academy and a great start for Byron Anthony.

The Academy U18s have been in great form of late since the 19th March 2016 with trips to Yeovil Town, Peterborough United, Mk Dons and one game at home to Bristol Rovers all of which are fantastic recognised category 3 Academies. The players have shown a great attitude and application during these games and have been rewarded with 10 points out of a possible 12 with 3 wins and 1 draw. The Peterborough game that was a draw the players created more chances in that game to win 3 games never mind one.

During this run the players have gained a lot of confidence and this has been evident in training and games, they have been challenged now to keep the same level of performance until the end of the season. A long trip to Dagenham & Redbridge followed by two home games against Northampton Town and Cambridge United to finish off the season.

This week Directors, Club Officials, Club Staff, First Team, Academy and the Community all gathered at the Training centre for a photograph.

We wanted to capture the many different parts of the club that make it what it is.

We recognise this didn't capture all elements of the club and intend to repeat the exercise at the forthcoming presentation evening.

Planning for next season

There have been a number of planning sessions in preparation for next season.

Given our current position we have had to cover all scenarios and until we are safe unable to enact all the plans in earnest.

However we are in good shape and as soon as we know our destiny we will be able to implement.

One area we have started to engage is season tickets, 100 club, business club and hospitality box holders. We have had some very useful feedback and fruitful meetings. This all helps shape our pricing model which will ensure that all our costs and indeed selling price is understood and consistent.

We intend to release the prices by the end of the month.

The club is exploring the possibility of having a pre-season tour.

Warren is really keen on getting the squad together to ensure the players get the best preparation possible for the forthcoming season.

As the position emerges more details will be released.

The club would like to place on record that it has not received and is not expecting to receive any allocation of tickets from the Welsh FA for the above tournament.

We have contacted the Welsh FA and they have confirmed this to be the case.

As relayed in our recent communication the above will be held on 14th April 2016 and Chaired by our President David Hando.

Finally, thank you for your continued support it is very much appreciated.

Your Club Your Trust 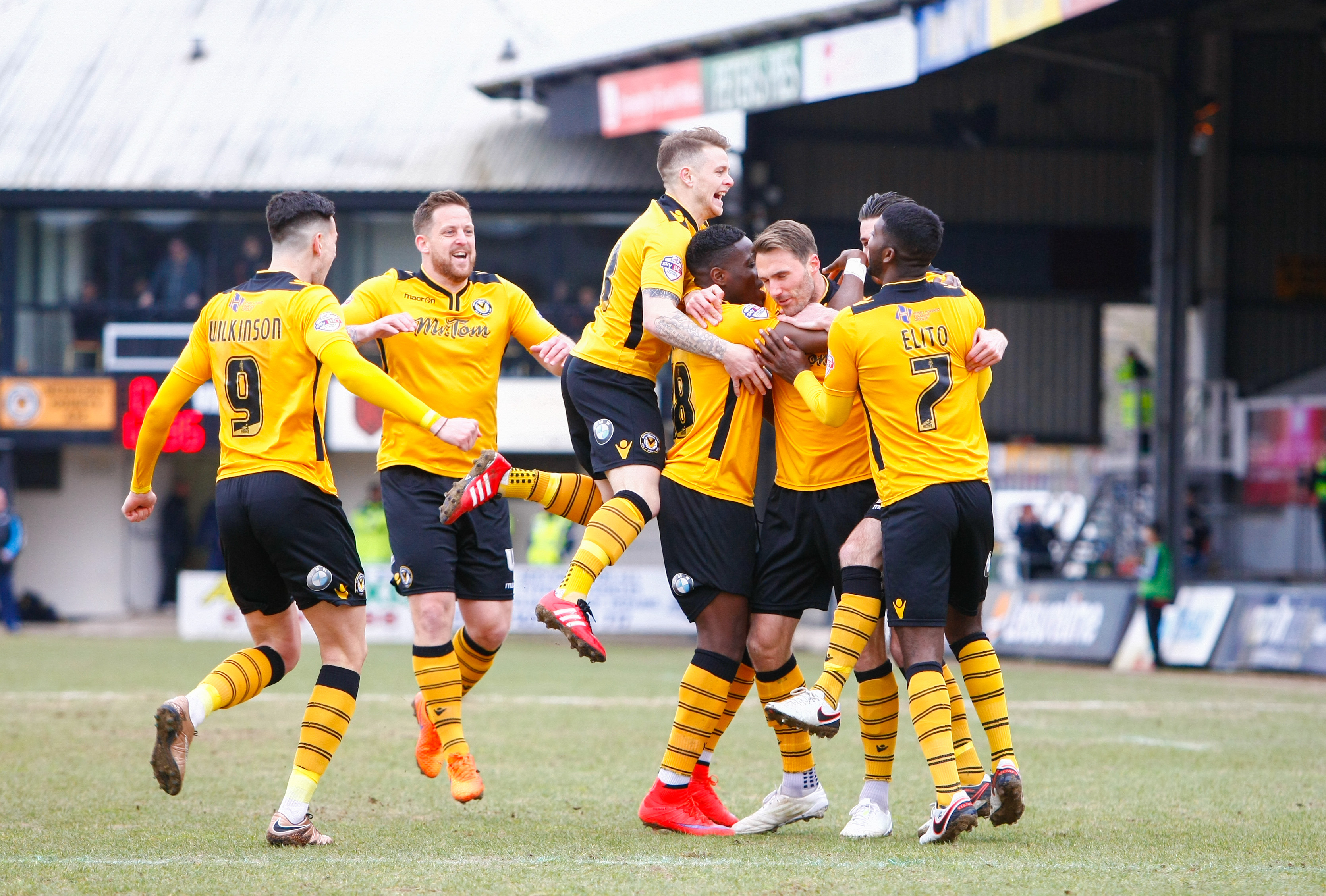