As a result of the staggering contributions of our wonderful fans we are delighted to announce that we have exceeded our target of 195k by raising an amazing 236k in just over month.

What an achievement and one the Trust Board are truly humbled by.

WE ARE A SUPPORTER OWNED COMMUNITY BASED CLUB

It seems prudent to share the journey we have been to get here - at times turbulent but always worthwhile.

When it was first muted that the majority shareholder would gift his shares to the Trust it was evident the Trust had to get a plan in place very quickly to raise the funds needed to meet the ambition.  With the help of Supporters Direct an approach was agreed, starting with the open meeting in July. We never knew how many people would come - but you came in your hundreds (over 400).

This set the scene, and sent a clear message to the Trust that the fans wanted a supporter owned club. With this clear mandate, the Trust Board worked to understand what funds and other resources were required, undertaking a thorough due diligence process. The process and its outcomes have been well documented, so we will not dwell on that. It is worthy of note, though, that the club had not been run in a way off the field that reflected what was happening on it. The task seemed immense and, still today, there is a significant amount to do to put in place the right foundations that can be built upon to make us a sustainable club.

The Trust Board had a firm focus, and were working steadily towards the Share launch. Incidentally, the ‘infamous’ Monday night transition meeting with the previous Board was never in the plans, nor something the Trust Board would have wanted. In fact, and to a certain extent, for the four members who joined the Board it acted as an unnecessary distraction from the ‘job in hand’ but the feeling was if we had not have stepped up the deal could have been put in jeopardy - the Trust were being put in a no win situation. It all happened in a very short space of time, with not a lot of consideration time! As a result, and following discussion with the major shareholder, the Trust Board members became Directors of the Football Club. At that time, only one of the four, Tony Pring, had passed the Football League ‘fit and proper’ test. By default Tony had no option but to become Chairman.  His reaction when asked what he thought will be forever remembered - “I need a whisky”.

With the added complication of acting in the capacity of club Directors, it was imperative that supporters understood that the funds still needed to be raised and the plan had not changed.

The Share Offer Launch itself was a well attended event with a rather robust question and answers session. It was now down to the Supporters to acquire shares. The very fact that we have reached the target figure shows how the Supporters stepped up and stood behind the common goal to achieve a supporter owned club.

So, a few statistics over the last few months:

• Over a thousand emails sent

• And of course…the Target exceeded

So what now?  The future is bright, and it’s certainly amber!

The supporters have control, and the club is community based. (subject to Football league approval)  Now the hard work really starts. The club must live within its means, and we will now put the appropriate controls in place to ensure that happens. That has already commenced and with the Governance model we have shared, it will continue.

We will shortly be issuing our 90 day plan which will lead us up to the commencement of the incremental democratic elections. It is important that the club has continuity and this is why an incremental approach will be applied.

No one should underestimate the challenge ahead. The club has been in a difficult place and it is going to take some time before it gets to where we would like it to be. That said, we are confident we can achieve this with the plans we have.

The finances, as at a number of other clubs, will have to be carefully managed to ensure we live within our means whilst at the same time supporting the manager as much as possible. This is possible. We need to be prudent in our spending,  driving down our cost base and increasing our revenue through a number of channels - making sure the revenue is turned into cash. We have some great opportunities, but we need to take them and need to change the club's culture to work within the right governance structure.

The Community side has to be at the heart of what we do as a club, and Saturday’s game with the entertainment will offer a flavour of what we want to introduce. A club like ours relies on and needs volunteers. They are the backbone of the club. It is important that they are recognised for the excellent work they do and we aim to do that.

The transparency, communication and engagement will continue as we have done throughout the funding campaign. We have made a commitment to you the Supporters and we aim to follow this through.

In concluding we cannot thank the fans enough for their support and we need that to continue. The hard work will be maintained and with everyone pulling together we are sure the club will prosper under supporter ownership.

YOUR CLUB YOUR TRUST 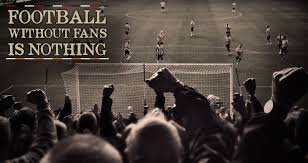